Instruments from the past with a contemporary spirit

In order to stay as close as possible to the composers’ intentions, we choose to play on period instruments and conduct thorough musical and historical research on all pieces we perform.

Choosing period instruments means choosing to interpret the composer’s music as close to his or her original intentions as possible.

When we say “period instruments”, we refer to the period during which the score was composed. To each score its specific era, and thus, its specific instruments. The instruments you will see and hear during our concerts have not all been crafted in Mozart or Beethoven’s lifetime. Sometimes, they’re originals, but they can also be copies designed on the model of historical instruments and made out of the same materials. In both cases, they require a specific playing technique.

Period instruments are manufactured with the same techniques that were known at the time they were played. Indeed, manufacturing has evolved according to the requirements of each era’s music, taste and trends shaping the silhouette of the orchestra. The opposite is also true! Although performing on period instruments makes the player somewhat vulnerable – the technique being much riskier – it is also particularly interesting. These instruments are full of nuance and personality. Modern instruments are less risky to play, are more reliable and have a stable sound, but the musicality is transformed. The sound of an orchestra using period instruments is much closer to what the audience experienced two centuries ago – it is like travelling through time!

« To me, this music is best served when performed with the instruments for which it was intended. Instruments from the 19th century are fitted to the suppleness of this musical style. Strings are lively, and make it easier to render the harmonic transparency of certain passages, or the orchestral density of others. To reach this goal, period instruments and the knowledge of historical musical styles of their expert players are extremely precious. »
Laurence Equilbey, artistic and musical director of Insula orchestra, about the recording of Louise Farrenc’s 1st and 3rd symphonies

The quest for historical accuracy in sound is not limited to using period instruments: interpretation of signs on the score, performance practices, timbres, consulting written sources, understanding the historical and philosophical contexts, and performance conditions at the time… “Historically informed” interpretation requires looking into all fields related to the musical piece. However, the live aspect of a performance must never be forgotten: it is crucial to keep in touch with our time and to make necessary concessions, the goal always being to serve music and never dogma.

A few examples, from historical to modern

Baroque violins lay directly on the players shoulder, without a shoulder rest. Some musicians in our orchestra play with chin rests and some do without them, while others choose depending on the performed repertoire. Chin and shoulder rests allow much firmer support of the violin, freeing the arm and thus, the left hand. Violinists can perform scores that are much more virtuosic in nature, thus following historical evolution of the repertoire. Chin rests, for example, appeared on violins alongside the development of the Romantic repertoire. Shoulder rests appeared later in the 19th century. The liberty of movement offered by chin and shoulder rests to violinists can be compared to the one offered by the endpin to cellists. With the endpin, the cellist can play on the whole length of the fingerboard without the instrument sliding.

The stick of baroque bows is slightly convex (the shape is turned towards the outside, like an archery bow) and there is less tension in the hair. The baroque bow is more supple and is ideal to sculpt musical phrases. Later on in history, bows adopted a concave shape, increasing tension in the hair and thus enabling to play with more power and regularity.

Baroque violins are fitted with gut strings – usually, sheep gut – which are very thin and break easily. Their timbre is warmer and their sound more intimate. Playing on gut strings allows for more suppleness and nuance.
Metal strings on modern violins are sturdier and give a brighter and more equal sound.

Baroque transverse flutes are called traversos. They are made out of wood and usually have seven holes and only one key cover. Fingering is often complex to play certain notes. The range of the traverso is quite small, but the sound is exquisite. The sound is so delicate that at times, multiple flutists have to play the same part for it to be heard above the orchestra.
Modern flutes are made out of steel and have multiple key covers, which make it easier to block the holes. This enables the flute much more velocity, as well as a much wider range of notes.

Disassembled side-by-side, a baroque and a modern flute. Notice the much larger number of key covers on the modern flute. © Julien Benhamou for Insula orchestra.

During the baroque and classical periods, timpani were small or medium-sized. Their sound is very sharp, at times light, at times flamboyant.
Tuning a timpani drum requires turning the 5 or 6 tuning screws positioned all around the drum, in order to tighten or loosen the veal skin.
Nowadays, timpanists play on 3, 4 or 5 different drums in order to play many different notes. Timpani drums can be very large, rendering their sound more powerful. A tuning pedal enables the player to rapidly change tension on the skin to play a different note. The sound is deep, powerful, and has an intense resonance.

Baroque horns, also called natural horns, are differentiated from the modern horn by their lack of valves: every note is formed using only the lips, embouchure and breath pressure. Some notes are thus hard to reach.
There are different types of coiled tubing, called crooks. Each crook only emits a limited range of notes, and in order to play other notes, the player much change the tubing. Each crook has a specific, recognizable timber. It is also possible to modify the pitch by inserting a hand into the bell of the instrument. This technique is called hand-stopping. The sound becomes quite peculiar, a bit nasal and metallic.
The modern French horn has several valves, with which the hornist can play many notes quickly and with precision. He has the possibility of rapidly changing the tubing’s length. The sound is thus more homogeneous throughout the scale. On a modern horn, hornists can play the notes covered by 12 different crooks on a natural horn. 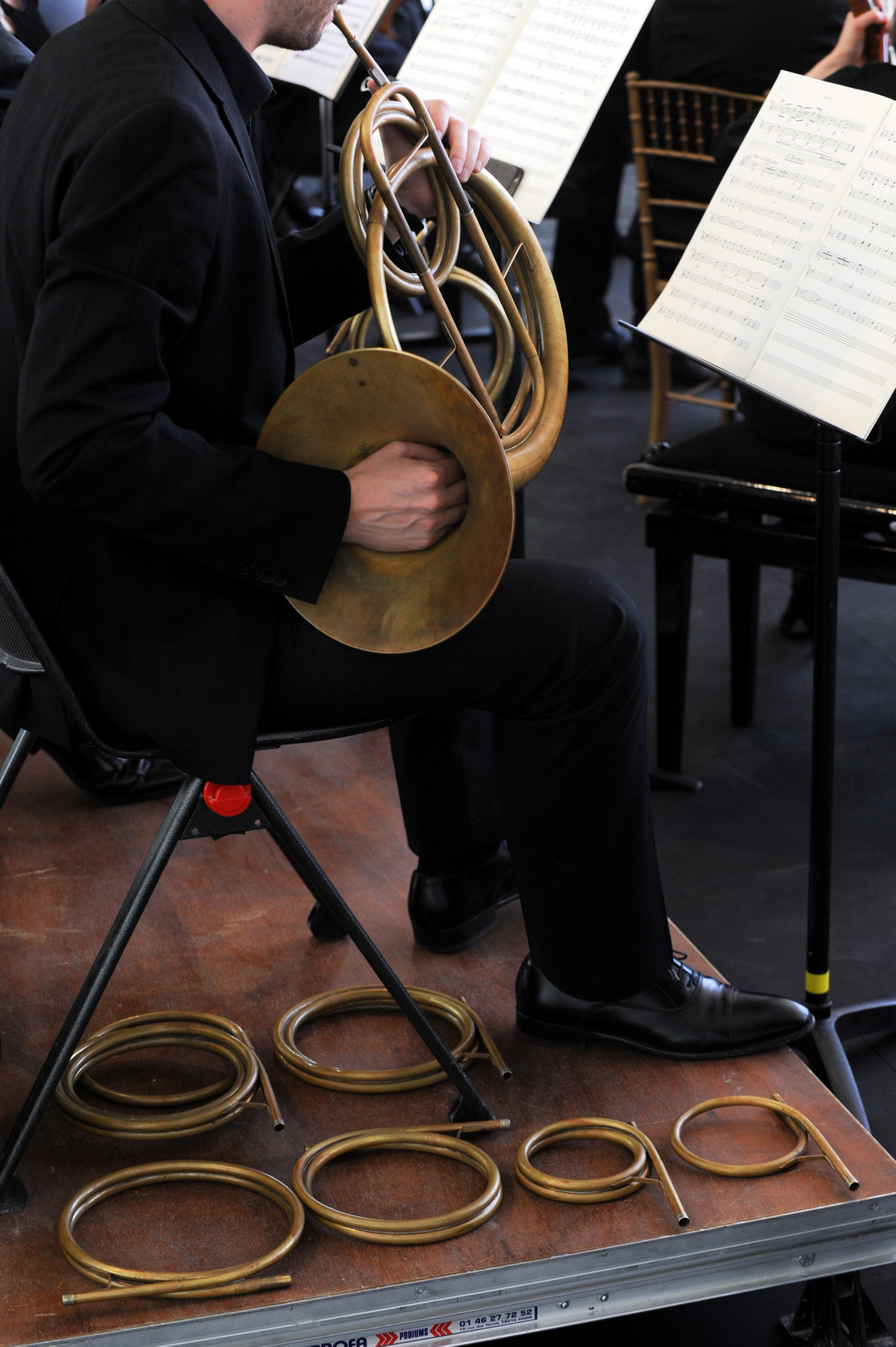 During a performance, to each their technique to keep their crooks at hand! © Axel Coeuret for Insula orchestra.

A modern horn and a natural horn side-by-side. © Julien Benhamou for Insula orchestra.

The baroque trumpet is called “natural” because it doesn’t have any valves. Valves only appeared about 200 years ago, around 1815, and revolutionised this instrument which had grown out of fashion. When playing the natural trumpet, the player would change notes by controlling his breath and the way the air vibrated in between his lips. As for the horn, playing certain notes proves to be very tricky.
The appearance of valves was a radical change. As on a trombone, they allow the lengthening of the tube. The trumpetists can thus play higher or lower notes much more easily.

From left to right: two natural baroque trumpets and a modern trumpet with valves © Julien Benhamou for Insula orchestra.